BVR registration back again in Banjul

BVR registration back again in Banjul

The Gambia and the IEC know a thing or two about sustainable voter registration. It is one of the few countries in Africa to do BVR right the first time. The IEC is now registering another 300,000 new voters using the tried, tested and trusted ESI BVR system. By sticking with a system that worked flawlessly in 2011, the IEC will not face having to start all over again (an unfortunate situation faced by many other Commissions implementing BVR exercises). 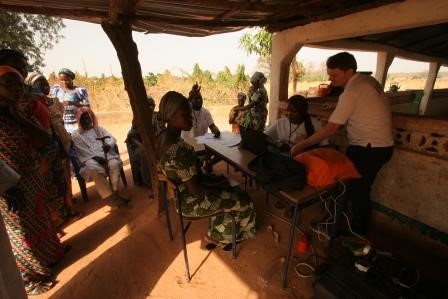 In 2011, the government of The Gambia and Electoral Services International Inc. (ESI) of Ottawa Canada implemented the country’s first BVR project. Working under some of the most demanding conditions in the world, the result was a resounding success. The IEC went against the grain and upon completion of each registration, they produced and handed out plastic voter ID cards. Plastic PVC ID cards can only be produced onsite with great care and strict quality control measures.

The Gambia’s first BVR project came on the heels of one of Africa’s first and most successful BVR projects (one of the continents first): Kenya’s first successful mobile BVR exercise. The Kenyan project was also carried out in cooperation with The Canadian firm, ESI. The IEBC of Kenya and ESI showcased the Commission’s first real, reliable voters’ list with completion of the BVR project in 2010.

Less than a year later, The Gambia began working together with ESI on the country’s first Biometric Voter Registration project. Secure, customized robust mobile BVR kits were delivered to the field, training of IEC staff members was carried out and critical matching was then outsourced to the ESI datacentre in Belgium. Once duplicates were identified, it was back to Banjul for the human adjudication process. Upon successful completion, The Gambia now had one of Africa’s cleanest voters’ lists comprised of 800,000 unique registrations with no errors and no multiple entries. During the course of the project, no major problems surfaced. Any minor glitches were immediately resolved by a highly skilled, well trained and qualified local IEC BVR team.

Five years later, the IEC required supplementary voter registration for its 2016 elections. With the original system intact, the IEC (after considering ESI’s industry “competitors”) naturally turned to ESI for support once more. The Gambian IEC was to benefit immediately from ESI’s upgraded and improved BVR software.

Along with the upgraded ESI BVR software, the IEC will also benefit from the advantages of using the same trusted system. The commission will once again call upon a pool of experience and knowledge gained from the first exercise. Paramount to the Gambian Government is the fact that using the same system will also save valuable financial resources.

Refresher training of IEC personnel started immediately after the New Year and 50 VR teams were dispatched to begin countrywide registration on January 14th. The registration exercise is planned to run until the 12th of March. The process is a highly mobile one given the quality of the IEC personnel. Upon completion of the project, it is estimated that half-a-million new voters will be added to the pre-existing clean voters’ list.

News from the ESI field team is realistically positive and the registration of new voters is going exceedingly well. This is a welcome change to the serious problems often encountered by many similar projects elsewhere. The IEC is a showcase for doing BVR right and doing it right the first time. Both the IEC and ESI welcome and invite interested observers from EMBs and elsewhere to come and see the process live to get a firsthand look at just how BVR really works.

The process will soon move on to the matching and adjudication phase of all voter data and once again The Gambian voters’ list will be one of Africa’s cleanest. Thanks to the IEC-ESI partnership, it will remain this way for years to come.

In close cooperation with ESI, the IEC will print a provisional voters’ list to be displayed countrywide for public viewing and verification by those on the list. Any changes as a result from this exercise will be made to the database and a final list will be produced for each polling station. Once again with a flawless roll, The Gambia and its electorate will be more than ready for polling day, now scheduled for December 2016

The Gambia’s second BVR endeavor will most certainly be another successful project. Failure to provide a clean voters’ list is simply not an option for the Government of The Gambia, the IEC or ESI.