By Gary Hatigeva. Published on September 18th, 2014 in The Island Sun 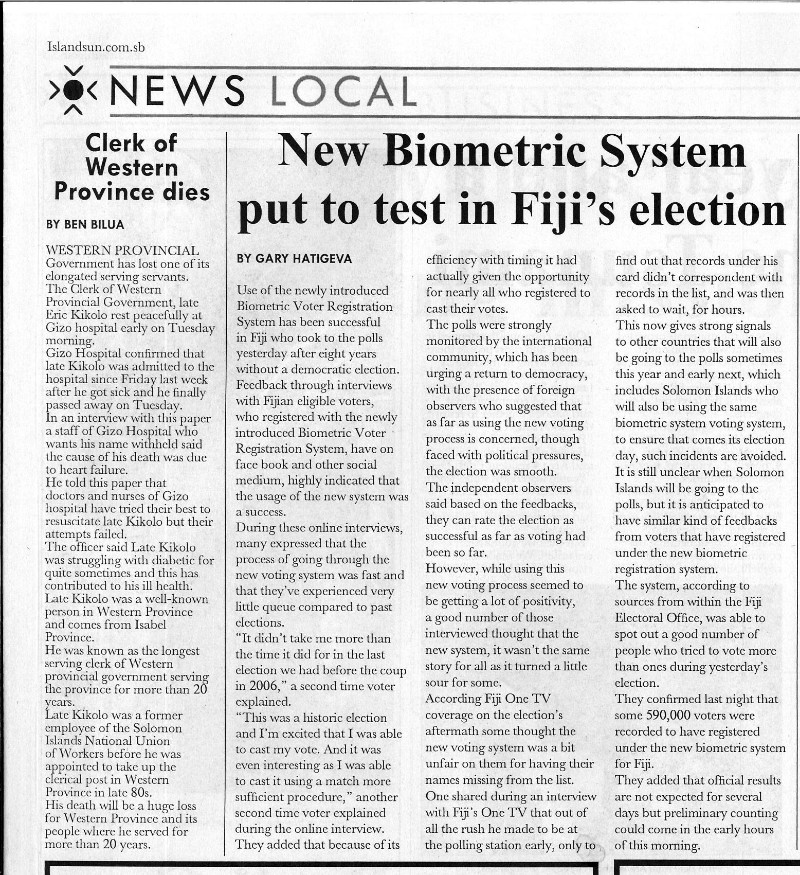 Use of the newly introduced Biometric Voter Registration System has been successful in Fiji who took to the polls yesterday after eight years without a democratic election.
Feedback through interviews with Fijian eligible voters, who registered with the newly introduced Biometric Voter Registration System, have on face book and other social medium, highly indicated that the usage of the new system was a success.
During these online interviews, many expressed that the process of going through the new voting system was fast and that they’ve experienced very little queue compared to past elections.
“It didn’t take me more than the time it did for in the last election we had before the coup in 2006,” a second time voter explained.
“This was a historic election and I’m excited that I was able to cast my vote. And it was even interesting as I was able to cast it using a match more sufficient procedure,” another second time voter explained during the online interview.
They added that because of its efficiency with timing it had actually given the opportunity for nearly all who registered to cast their votes.
The polls were strongly monitored by the international community, which has been urging a return to democracy, with the presence of foreign observers who suggested that as far as using the new voting process is concerned, though faced with political pressures, the election was smooth.
The independent observers said based on the feedbacks, they can rate the election as successful as far as voting had been so far.
However, while using this new voting seemed to be getting a lot of positivity, a good number of those interviewed thought that the new system, it wasn’t the same story for all as it turned a little sour for some.
According Fiji One Tv coverage on the election’s aftermath some thought the new voting system was a bit unfair on them for having their names missing from the list.
One shared during an interview with Fiji’s One TV that out of all the rush he made to be at the polling station early, only to find out that records under his card didn’t correspondent with records in the list, and was then asked to wait, for hours.
This now gives strong signals to other countries that will also be going to the polls sometimes this year and early next, which includes Solomon Islands who will also be using the same biometric system voting system, to ensure that comes its election day, such incidents are avoided.
It is still unclear when Solomon Islands will be going to the polls, but it is anticipated to have similar kind of feedbacks from voters that have registered under the new biometric registration system.
The system, according to sources from within the Fiji Electoral Office, was able to spot out a good number of people who tried to vote more than ones during yesterday’s election.
They confirmed last night that some 590,000 voters were recorded to have registered under the new biometric system from Fiji.
They added that official results are not expected for several days but preliminary counting could come in the early hours of this morning.

Unknown author. Published on July 29th, 2012 in the Fiji Sun 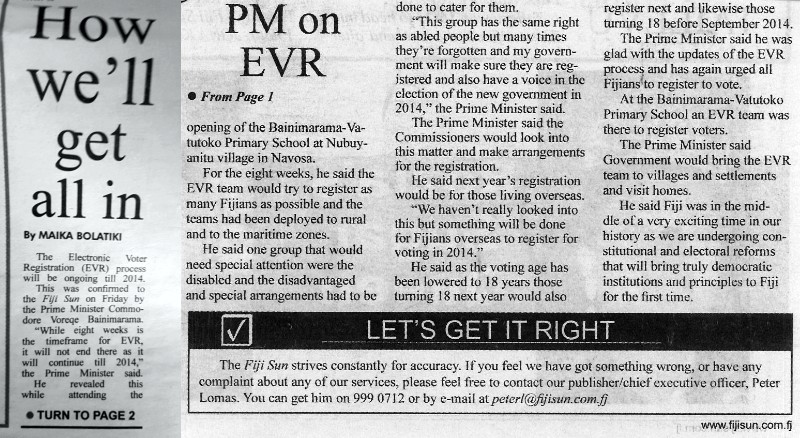 The Electronic Voter Registration (EVR) process will be ongoing till 2014.
This was confirmed to the Fiji Sun on Friday by the Prime Minister Commodore Voreqe Bainimarama opening of the Bainimarama-Vatutoko Primary School at Nubuyanitu village in Navosa.
For the eight weeks, he said the EVR team would try to register as many Fijians as possible and the teams had been deployed to rural and to the maritime zones.
He said one group that would need special attention were the disable and the disadvantaged and special arrangements had to be done to cater for them.
“This group has the same right as abled people but many times they’re forgotten and my government will make sure they are registered and also have a voice in the election of the new government in 2014,” the Prime Minister said.
The Prime Minister said the Commissioners would look into this matter and make arrangements for the registration.
He said next year’s registration would be for those living overseas.
“We haven’t really looked into this but something will be done for Fijians overseas to register for voting in 2014.”
He said as the voting age has been lowered to 18 years those turning 18 next year would also register next and likewise those turning 18 before September 2014.
The Prime Minister said he was glad with the updates of the EVR process and has again urged all Fijians to register to vote.
At the Bainimarama-Vatutoko Primary School an EVR team was there to register voters.
The Prime Minister said Government would bring the EVR team to villages and settlements and visit homes.
He said Fiji was in the middle of a very exciting time in our history as we are undergoing constitutional and electoral reforms that will bring truly democratic institutions and principles to Fiji for the first time. 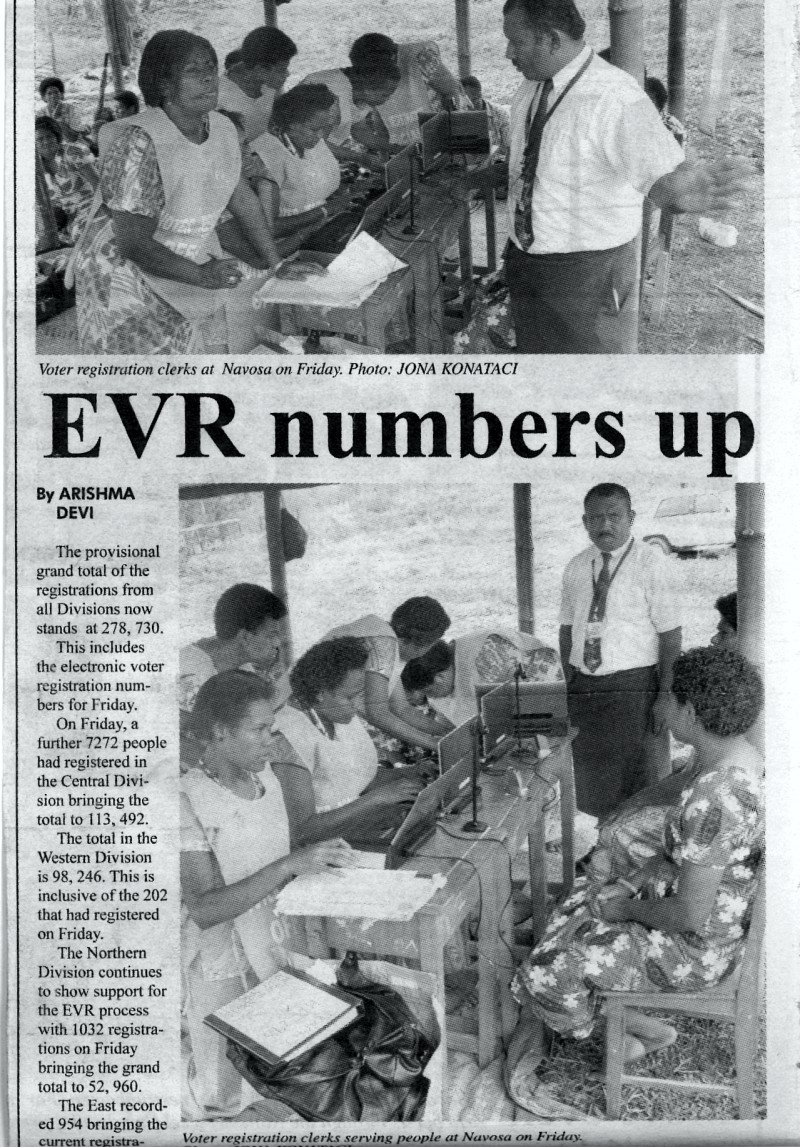